My cousin’s Husband came to visit us. He was working in Tampa and than he decided to come at his last weekend to visit. I rented the N89540 for Sunday morning. We woke up at 5 am but we were both so tired and it was so dark we went back to sleep and reset the alarm to 6 am. It was still hard to get out of the bed but better. We got ready quickly and I raced out to the airport. I was excited because I haven’t fly for over a week. Unfortunately I did forgot about a headset and did not remember until late night, so we only had one. I texted Szilveszter but I did not get an answer we decided we just gonna go and he will not fly without one.
Did the preflight checklist and first time today, I found water in the right tank. It was very cool that from out of so many flights it was only once I found water.
After all done we hopped in, clearance and ground was on ground frequency, listened to ATIS – we had perfect conditions; wind 080@6, visibility 10, sky conditions clear. Perfect. One call and already taxiing to runway 8. Runup, a quick hold short for a landing aircraft and we were at full power and already taking off. It was smooth and perfect. I just had an inner smile as I was feeling the lift, as the shadow of the airplane got smaller and that happiness what I feel every time I get to fly while in control, absolutely aware and being in that one moment and exactly knowing what to do in the next.

We headed out to the NW to the Everglades, I wanted to let him fly a little. After I did 2 steep turns I let him hold the aircraft at straight and level. He took some pictures of the swamp while I descended a little and we turned out to the North and looked for the racetracks. I just could not figure out how to switch the GPS back to VFR maps, and I gave up soon. I don’t need it. I had a plan and a map and it was fun to look for the landmark. I called Boca Tower and we turned East bound to go South at the shore back to FXE.

As soon as we reached the beach we descended to 500 feet and flew by the boats and people and houses. Always every time I do this I just get so amazed by the gorgeous colors of the water and the sand and the sky touching the water at the horizon.

At about 7:55 over the Boca Inlet I changed to PMP frequecy, but when I called I couldn’t get them. I called at least 5 times than before entering their airspace I took a left 360 and switched back to BCT to check my radio. Well, as it turned out there was absolutely nothing wrong with my radio, but PMP tower does not open until 8am. Daaa! I knew this well, but I completely forgot about it. Boca was kind enough to remind me so I entered airspace with uncontrolled airport procedures. By the time I was abeam the airport they were open and I called them right away and they switched me over to FXE. 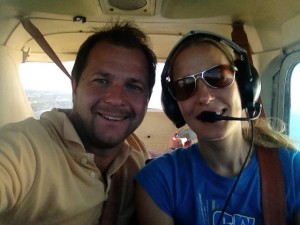 At downwind I landed behind a Kingair. It was a perfectly smooth landing with great speed and the left wheel, right wheel front wheel touch down. Just makes me happy. He took a video of it hopefully one day I will be able to upload it here.